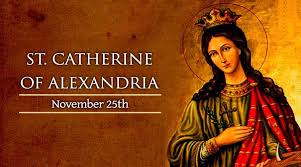 Hello. I’m Father Gilles Surprenant. This is the last week in Ordinary Time and Sunday we begin our Advent preparation for Christmas. Only seven weeks ago we began this English Daily Mass televised LIVE by Salt + Light Media. Live Masses are difficult to shape into 29 minutes. This live Mass brings Mary Queen of the World Cathedral and over a dozen priests into your home in real time. It is our privilege to serve you before God. Television time is expensive to produce; so we appreciate your support by way of your prayers and donations. Thank you.

Here we are still in November and we continue to remember the dead and pray for them. Many are not remembered that were not wanted: the homeless, the abandoned, the refugees, those who are trafficked and sexually exploited, those who die alone in back alleys, and the ongoing slaughter of the innocents killed from the womb every day. Whether they are aware of it or not, all those who survive the unwanted dead also suffer because of their loss.

When in 1982 my baby nephew was killed in a car crash that almost killed my sister and mother, it seemed unfair that the baby would never get to grow up. It was so unfair for millions to die in the Holocaust of WWII that many people weren’t sure they still wanted to believe in God. Yesterday we remembered 130,000 Christians martyred in Vietnam over two centuries. Christians have been butchered since the time of Jesus’ Ascension into heaven, beginning with the 12 apostles and thousands of Christians for the next 300 years. It’s all so unfair.

Our God has never done or said anything to give the impression that life should be fair. He chose to create angels and human beings with the priceless gift of free will, which meant from the start that it would be possible for some angels and some human beings to abuse this gift.

We can certainly not accuse Jesus of leading us astray. As we heard in the brief quote today from Jesus’ warnings to his disciples; Jesus knew with certainty that some of us would be put to death just as He himself was about to be put to death. God the Father was not afraid of giving us the gift of free will and Jesus his Son was not afraid to endure the misuse of our free will when our ancestors turned against Him and put him to death; as He knew they would.

In the vision that God gave to the beloved disciple, the apostle and evangelist John, he saw that God will demonstrate at the end of time that He actually is fair and just as well as merciful. John needed a vision in order to see that what happens in this life is directly connected to what will happen next in eternity, once we pass through the thin veil of death into God’s presence.

Every good done in this world will be rewarded in eternity, and every evil done in this life will suffer the consequences, and in some cases, forever. God is willing to forgive if only we will repent of our evil and ask forgiveness from those we have harmed and from God. In the case of abortion, those little infants now comforted in God’s radiant love and life-giving presence can also forgive if those who let them die will ask to be forgiven. God will also forgive. 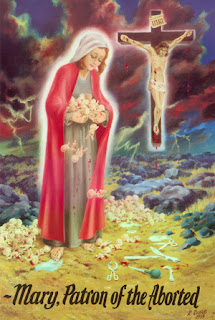 It is estimated that worldwide in 50 years over 2 billion infants have been terminated and extricated from their mothers’ wombs. That is 30 times the number of deaths caused by WWII. A month from now we will honor the handful of Holy Innocents who were killed by King Herod who felt threatened by the birth of Jesus. As over 150,000 little innocents cry out to heaven each day at the moment of their violent death; those who abandon them also cry out in silence.

Let us remember now before God those hundreds of thousands who today will die unwanted and unremembered; as well as for those who were unable to make room for them; for they – like each of us – are loved by God: the Father, + the Son, and the Holy Spirit. Amen.

Announcement: Salt + Light Media is happy to receive your contributions and intentions in support of this Live Daily Mass. Please continue to send your donations and Mass intentions to Salt + Light Media. Thank you for your support. To contact me just send an email to fathergilles@gmail.com

St. Catherine of Alexandria, (died c. early 4th century, Alexandria, Egypt; feast day November 25), one of the most popular early Christian martyrs and one of the Fourteen Holy Helpers (a group of Roman Catholic saints venerated for their power of intercession). She is the patron of philosophers and scholars and is believed to help protect against sudden death. 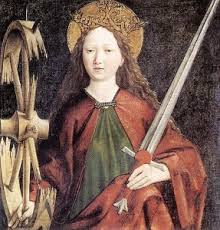 St. Catherine of Alexandria is not mentioned before the 9th century, and her historicity is doubtful. According to legend, she was an extremely learned young girl of noble birth, possibly a princess. She protested the persecution of Christians under the Roman emperor Maxentius—whose wife and several soldiers she converted while imprisoned—and defeated the most eminent scholars summoned by Maxentius to oppose her. During her subsequent torture, she professed that she had consecrated her virginity to Jesus Christ, her spouse, and was sentenced to death. The spiked wheel by which she was to be killed broke when she touched it (whence the term Catherine wheel); she was then beheaded.

After her death, angels allegedly took her body to Mount Sinai, where, according to legend, it was discovered about 800 CE. In the Middle Ages, when the story of her mystical marriage to Christ was widely circulated, she was one of the most popular saints and one of the most important virgin  martyrs.  St. Joan of Arc claimed that Catherine’s was among the heavenly voices that spoke to her.

According to the Legend of St. Catherine, this young woman converted to Christianity after receiving a vision. At the age of 18, she debated 50 pagan philosophers. Amazed at her wisdom and debating skills, they became Christians—as did about 200 soldiers and members of the emperor’s family. All of them were martyred.

Sentenced to be executed on a spiked wheel, Catherine touched the wheel and it shattered. She was beheaded. Centuries later, angels are said to have carried the body of Saint Catherine to a monastery at the foot of Mt. Sinai. Devotion to her spread as a result of the Crusades. She was invoked as the patroness of students, teachers, librarians and lawyers. Catherine is one of the 14 Holy Helpers, venerated especially in Germany and Hungary.

Reflection – The pursuit of God’s wisdom may not lead to riches or earthly honors. In Catherine’s case, this pursuit contributed to her martyrdom. She was not, however, foolish in preferring to die for Jesus rather than live only by denying him. All the rewards that her tormentors offered her would rust, lose their beauty, or in some other way become a poor exchange for Catherine’s honesty and integrity in following Jesus Christ. Saint Catherine of Alexandria is the Patron Saint of: Lawyers, Librarians, Philosophers, Students, Teachers. 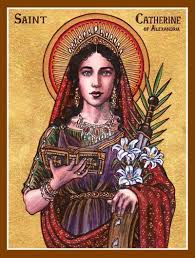 Saint Catherine of Alexandria is a canonized saint in the Catholic Church who, per Christian tradition, was martyred around 305 in Alexandria, Egypt. Of course, the Church of the first Millennium was undivided. She is also recognized as the Great Martyr and Saint by the Orthodox Church. There are no surviving primary sources attesting to her existence, but the fact that her memory, and the stories about her, have been kept alive - and handed down in the tradition - certainly confirm her existence, and her life of heroic virtue and holiness.

The young saint was born around 287 in Alexandria, Egypt. At that time, Alexandria was one of the finest cities in the world, and a center of learning and culture as well as faith. Christian tradition states she was of noble birth, possibly a princess. As a member of the nobility, she was also educated and was an avid scholar. Around the age of fourteen, she experienced a moving vision of Mary and the infant Jesus, and she decided to become a Christian. Although she was a teenager, she was very intelligent and gifted. When the emperor Maxentius began persecuting Christians, Catherine visited him to denounce his cruelty.

Rather than order her execution, Maxentius summoned fifty orators and philosophers to debate her. However, Catherine was moved by the power of the Holy Spirit and spoke eloquently in defense of her faith. Her words were so moving that several of the pagans converted to Christianity and were immediately executed. Unable to defeat her rhetorically or to intimidate her into giving up her belief, the emperor ordered her to be tortured and imprisoned.

Catherine was arrested and scourged. Despite the torture, she did not abandon her faith. Word of her arrest and the power of her faith quickly spread and over 200 people visited her. According to some legends, the emperor's own wife, Valeria Maximilla was converted by Catherine. The emperor eventually executed his own wife over her conversion. However, this is not mentioned in the historical record and may be a legend. It is believed that Maximilla was alive and with her husband at the Battle of the Milvian Bridge in 312, seven years after the death of Catherina.

Following her imprisonment, Maxentius made a final attempt to persuade the beautiful Catherine to abandon her faith by proposing marriage to her. This would have made her a powerful empress. Catherine refused, saying she was married to Jesus Christ and that her virginity was dedicated to him. The emperor angrily ordered her to be executed on a breaking wheel. The breaking wheel is an ancient form of torture where a person's limbs are threaded among the spokes and their bones are shattered by an executioner with a heavy rod. It is a brutal punishment that results in a slow and painful death, normally reserved for the worst criminals.

When Catherine was presented before the wheel, she touched it and a miracle occurred that caused the wheel to shatter. Unable to torture her to death, the emperor simply ordered her beheaded. One account claimed that angels took her body to Mt. Sinai. In the sixth century, the Emperor Justinian ordered a monastery established in her name. The monastery, Saint Catherine's, remains to this day and is one of the oldest in the world.

Around the year 800, a legend spread that her body has been found with her hair still growing and a constant stream of oil coming from her body. Nothing exists to this day of her remains, and her very existence has been called into question. Despite these questions, and the possibility that her story may be confused with that of one or more other saints, she is still venerated in the Eastern Orthodox Church as a Martyr. Many Roman Catholics also venerate her to this day as one of the great virgin saints of the early Church.

During the medieval period, St. Catherine was one of the most famous saints of the Church. She has was a popular subject in renaissance art and many paintings from the period are dedicated to her.

Catherine is still a very popular Catholic name. The spiked wheel is a popular symbol often associated with St. Catherine. Her feast day is Nov. 25, and she is the patron of a great many professions and causes. Her patronage includes students, unmarried girls, apologists and many more as well as many places around the world.

God in Jesus accompanies us into the storm and saves us - 3rd Sunday of Easter - LSM sponsored by CAM - April 18th, 2021 - OLF Parish 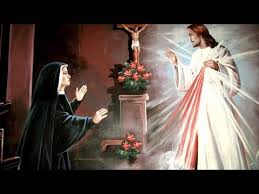 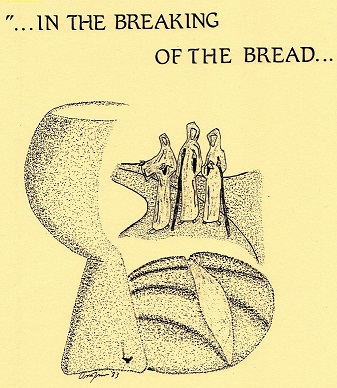